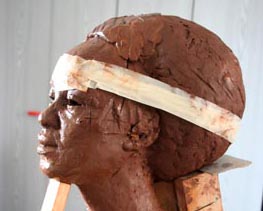 I worked at home this week and decided to try a new approach, to coil-build the hair as a separate bowl shape and apply it to the head once it had hardened a bit. 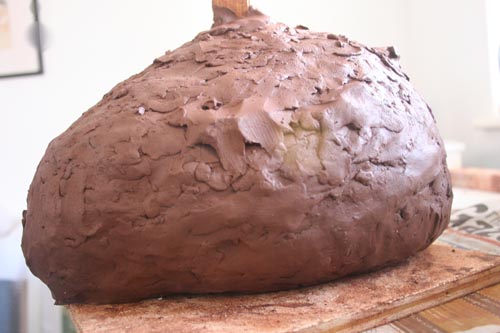 OOOOOps! It didn’t work as the hair was heavy and still flexible so I couldn’t hold it in place and fasten it to the head at the same time – needed an extra pair of hands. Oh! and I couldn’t get to the inside of the join to make a proper seam! So much for the new approach!!!

BACK TO THE DRAWING BOARD!

I cut the hair into quarters, lengthways and joined a piece to each side of the head, which allowed me to get my hand into the inside to make a good join inside as well as out. Once the two side pieces were in place it was much easier to join the other two quarters in the same way, leaving a hole at the back until the joins were complete, then making it smaller until I had just a finger-sized aperture which will help with the drying. 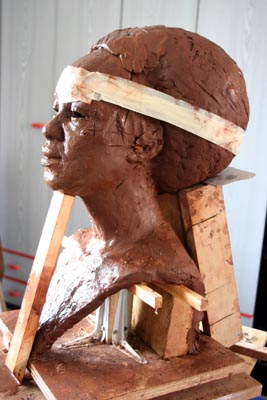 I will have to support the hair mass at he back until it has hardened off properly, looks a bit like a building site!

The tape helped to keep the shape while it dried for a while. 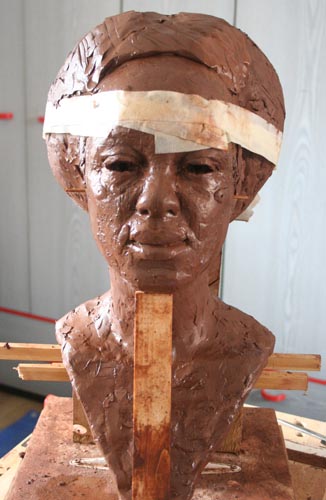 I have covered the face with cling film to try to retard the drying a bit and hope the hair will catch up and dry enough to support itself. I just hope the neck will be able to support the weight. 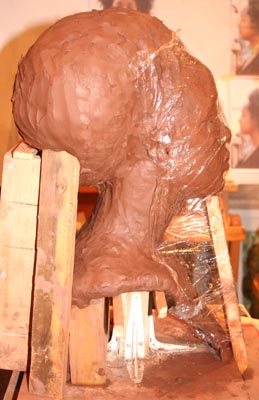 I am away this weekend so I will have to leave it like this till next week! A good thing really otherwise I would be fiddling!

Now I can add comments from my iPhone – Wow!